‘Flowrio2016extra’ app among top downloads in the region

Second Only to Pokemon Go in Google Play Store

MIAMI, Fla. (August 9, 2016) – The ‘FlowRio2016Extra’ App peaked at the #2 spot alongside the worldwide phenomenon Pokemon Go, as Olympic fans in the Caribbean downloaded the latest feature from Flow, the Official Broadcast Partner of the Rio 2016 Olympic Games.  ‘FlowRio2016Extra’ App, which is free to all users, is trending on both IOS and Android and is part of Flow’s commitment to transform the Olympic Games viewing experience across the Caribbean.

Customers are raving about the service; GregFF from Jamaica declared, “Flow has done something exceptional here. I have never been able to follow or experience the Olympic Games like this. Bravo @FLOWJamaica” - GregFF (Jamaica), Aug 06 2016 09:39 AM

Trinifido of Trinidad was elated and added, “Okay @FlowTT I have to rate you with this #FlowRioapp. It's awesome. #RioOlympics2016.” Fellow Trinidadian, Lizimberlis reported being “…happy I have @Flowtt...Olympic coverage of basketball, cycling and even equestrian.” Lizimberlis of Trinidad,  Aug 06 2016 12:13 PM. 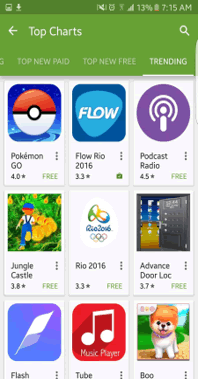 As news of the impressive ranking broke, Michele English, Acting President of Flow stated, “This is a proud moment for us at Flow, considering this has come literally on the first day of the 2016 Olympic Games. To actually be in the trending category alone counts as a major accomplishment, to be second place to Pokemon Go which is also the #1 trending search for IOS is beyond impressive. Our goal is to continue to delight our customers with innovations such as the ‘FlowRio2016Extra’ App and we are thrilled that they are responding to the investments to serve them better.”  According to English, “the downloads have so far exceeded our initial expectations, and as the Olympic Games progress and more of our Caribbean athletes spring into action, we anticipate even more activity, more searches and in effect more downloads.” Downloads are free to everyone, however, Flow customers have the added benefit of watching the live streams.

For English, the rating has taken on additional significance for the brand in light of the mammoth task the company has undertaken to prioritize and transform the customer experience. “As we place the customer at the heart of everything we do, we aim to complement, empower and enhance the consumers’ ever-evolving lifestyle,” English also said.

To view ranking visit the google app store - it is indicated in the trending section of the store: https://play.google.com/store/apps/collection/topselling_free?hl=en

The store displays by region - and is updated on a regular basis based on a complex algorithms, usually based on high volume downloads and usage over a short period. A mobile consumer survey reveals that nearly half of all mobile app users identified browsing the app store charts and search results (the placement on either of which depends on rankings) as a preferred method for finding new apps in the app stores. Simply put, better rankings mean more downloads and easier discovery.

As of July 2016; Android users were able to choose between 2.2 million apps. Apple's App Store remained the second-largest app store with 2 million.